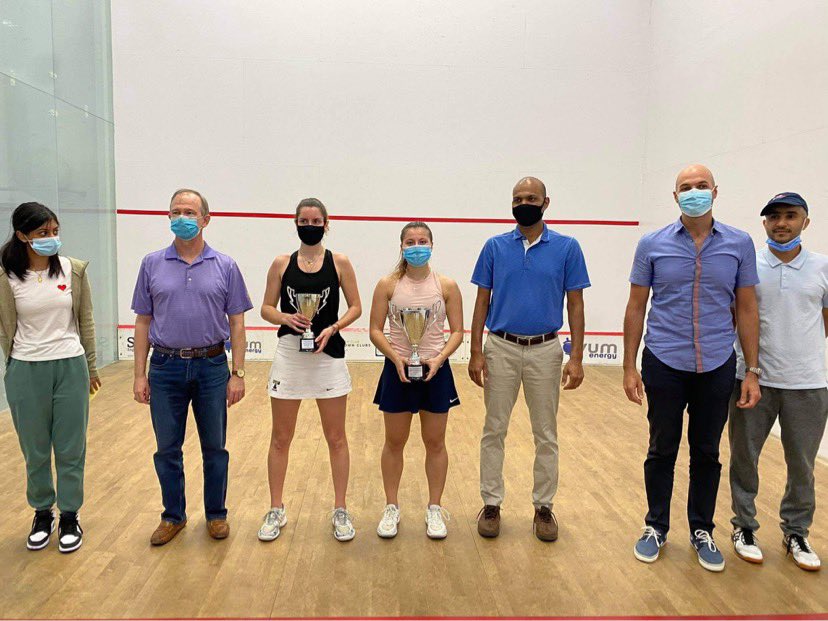 The final match of the tournament had a large crowd gathered to see these two well deserved finalists battle it out for the title of Texas Open champion. Both players came out of the gates quickly, not bothering to feel each other’s game out, but rather start shooting and counter-attacking right from the first few points. Le Coq was able to soak up the pressure applied by Tyma, and with fewer errors she took the opening game(8-11). Tyma, who had been showing exceptional strength the whole week leading up to the finals fought back hard in the following game, focussed on taking the ball often well in front of the short line to really test Le Coq’s movement. This forced the game into a faster pace, which seemed to suit Tyma as she took the second game(11-7). By the third game both players had settled into their rhythm and the points started getting more physical. At 9-9, everyone in the crowd was on the edge of their seat. Excellent retrieving and percentage squash was what allowed Tyma the first opportunity at game-ball, and she did not let the chance slip away taking the third game(11-9). In the championship deciding game Le Coq seemed to lift off the gas just enough for Tyma to take an early 6-1 lead, before showing off some magnificent nicks to pull the game back to 6-4. This however was not enough as Tyma kept with the game plan and patiently wore down her opponent, ultimately defeating Le Coq in the fourth game(11-6). The match was a pleasure to watch as it contained a vast repertoire of both shot-making and retrieving. All those watching from the side-lines learnt a lot from these two strong competitors, certainly inspiring the juniors with their dedication and creativity on the court. We could not have hoped for a more exhilarating final, and congratulations to both of our finalists.

There were certainly lots of nerves coming into this match for both players as the first game had a few shaky shots, but Le Coq managed to find her groove first taking it (11-5). Prow fought back in the second game, using a powerful forehand and forcing errors from her opponent. Le Coq showed some excellent retrieving, but it wasn’t enough as Prow took it (3-11). The third game was similar to the first, as a few too many unforced errors allowed Le Coq to take an early lead which she held onto to win (11-8). Prow’s determined attitude in the fourth game, coupled with some unbelievable touch forced the match to a decider(8-11). In the end it came down to experience, where Le Coq was able grind out a win against a tough opponent(11-5).